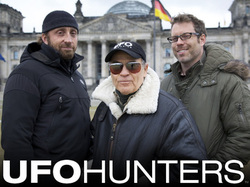 A group of men, travel America on the hunt for UFO’s. They encounter stories of aliens coexisting with our society and even working in tandem with us. Their job is to find factual evidence of these stories.

The crew, led by Bill Birnes (editor of UFO Magazine), look at all options of possible UFO phenomena. They are interviewed individually, to talk about their impressions on the hunt, and the interviews include locals who hold the urban legends for the area. The different reports of aliens are interesting. Reptilian aliens, grey aliens… and there seems to be only one guy who tries to separate fantasy from reality.

The scientific approach they use in trying to recreate and understand the reports of UFO phenomena adds credence to an otherwise taboo subject. They also speak to experts, such as geologists and state troopers on their opinions, some of which are surprisingly open to the possibilities.

I enjoyed watching this show. I like the down to earth approach of all investigators, but simply wished Bill would take his sunglasses off while on camera. Isn’t that just etiquette?

Official blurb:
UFO HUNTERS: THE COMPLETE SEASON 3
Follow the team from UFO magazine as they open their files and investigate cases around the globe in UFO HUNTERS:
THE COMPLETE SEASON 3 on DVD. Editor-in-Chief Bill Birnes and frequent contributor Dr. Ronnie Milione are joined by Pat Uskert, a journalist with a speciality in securing access to UFO documentation. The team's access to UFO evidence is unparalleled, and together they use eyewitness accounts, scientific experimentation, rare unseen footage and recently released documents to piece together compelling - and at times chilling - evidence of UFO phenomena. If the truth is out there, they'll find it