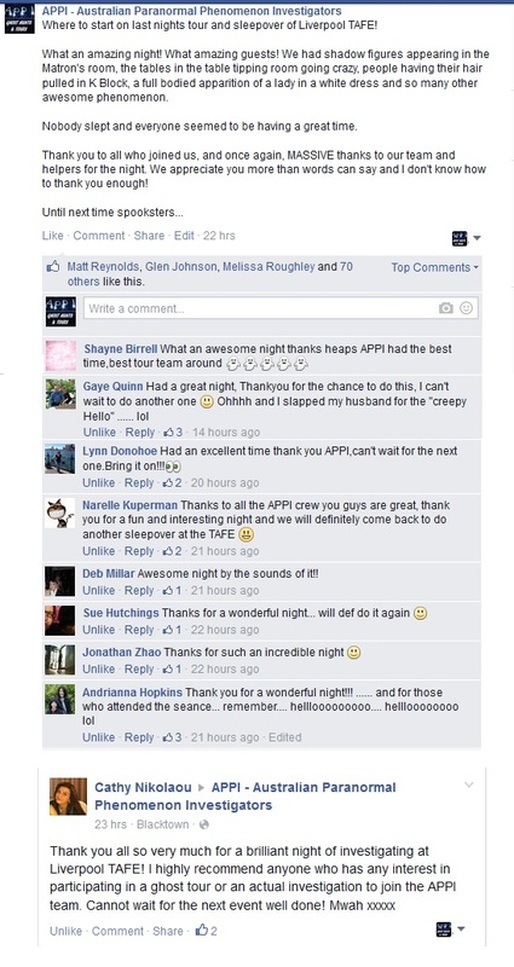 Jason Geissler: Big weekend of ghost hunting comes to an end part 1 the Liverpool tafe college overnight investigation all I can say is wow the sensory deprivation test was awesome heard boot steps which were later debunked as someone coming near the door if not I swear some one walked down the tunnel, plus hear a few sobbing cries come out of cell two. Man I love the dungeon, I have had three wonderful and completely different experience in each cell. A extra special thanks to Appi Australia, Peet Banks, Nic Hume, Stephie Milano, for letting me do what I want to do within reason every investigation, I love you guys and will always support you guys in what ever you do. I can't believe I am so blessed that you give me free range to carry out my own investigations within your investigations with my beautiful wife Julie Geissler. We owe you so much you are making us better investigators. We are forever in your debt, I wouldn't have had the experiences and fun and meet the people and friends with out you guys. (27/04/2013)

Suzanne Eades: Thank you APPI team, you guys are awesome. I had the BEST night and would recommend it to anyone. So much activity around, and the whole night was just so well done. I am definitely going to put my hand up for another one. (27/04/2013)

Darlene Sunshine:  Dylan, Vanessa and Myself spent a fantastic night at Liverpool tafe with the APPI team on Saturday night. I would like to extend a REALLY BIG THANK YOU to the team. The history of the site that they prepared for us was great and their knowledge of the paranormal was amazing. In a nutshell this was by far the best organised night sleepovers that we have attended and i would highly recommend them to anyone wishing to partake in an investigation like this. I am looking forward to attending another investigation with you. PS Vanessa is still shaking from BLOCK B lol. (13/07/2013)

Saroya van Laarhoven:  Last night Leosha and I went to a Paranormal Investigators night held by the Australian Paranormal Phenomenon Investigators, A.P.P.I.  The venue was at: College street Liverpool. NSW. Sydney Australia. The building now it a TAFE. So much history.  Leosha and I really enjoyed the experience and wish that it would have went for another night. The hours flew by so fast didn't sleep at all. Some orbs are seen in photo's I took but no human spirit forms. I did feel a heaviness come on me at one time when everyone in the room was meditating. I highly recommend the A.P.P.I to anybody who would love to experience investigating the Paranormal. Leosha and I will be going to the next Paranormal Investigators night for sure. Thank you team. (13/07/2013)