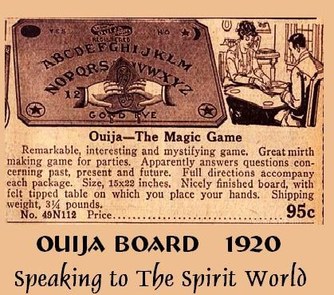 I laid eyes on my first Ouija board in my early teens.  Scared of the unknown yet taunted by the planchette we settle in and asked questions, the board seemed to answer…spirits were talking to us.  Needless to say my tender years and fear got the better of me and I backed away from the board quick smart.  A lot older and hopefully a lot wiser, the skeptic in me uses the Ouija in paranormal investigating experiments.


One of the earliest forms of this method of divination was ‘Fuji’, from the Ming Dynasty (1368-1644). This consisted of spirit-writing using a suspended sieve or winnowing tray, directing a stick or stylus, typically made from a willow or peach branch to receive messages from beyond.  The Chinese Fuji spirit-writing involved a specialised vocabulary comprising mainly symbols.  This form of divination ended up being prohibited by the Qing Dynasty (1644).  Another historical account of Ouija origin comes from 540 B.C. where it is said that Greek philosopher Pythagoras conducted séances on a specially designed table with wheels, which would move towards signs and symbols providing messages from the next world.


In 1886 an article in The New York Times stated that Mr Charles W Kennard of Chestertown MD USA, used his wife’s breadboard and a saucer to speak with the dead.  This handmade ‘talking board’ became the craze of Ohio four years before its supposed true discovery.  Kennard went onto business in 1890 as the Kennard Novelty Company, and in early 1891 acquired the rights to the first ‘talking board’ patent, registered by Elijah J Bond.  Kennard went on to sell his share of the business and the board fell into the hands of one William Fuld who renamed the business Ouija Novelty Company.  In 1927, Fuld died a mysterious death.  It is believed he suffered complications from falling off a three story building.  It had been suggested that Fuld’s tragic death was due to the evilness of the Ouija board and he had actually suicided.  The rumours surrounding his death only served to boost Ouija sales.  The Ouija boards patent passed hands from the Fuld family to Parker Brothers in 1966, who’s operations location of Salem, Massachusetts, further added to the boards mystery.  In Parker Brothers first year of manufacturing, Ouija outsold Monopoly with over two million boards sold.  In early 1999, Parker Brothers stopped manufacturing the classic Fuld Ouija board and switched to a tacky glow in the dark version.  Gone is the intricate detail and the name William Fuld.  The traditional Ouija boards are now prized collector items.


There are two main schools of thought on how the Ouija board operates.  One is the belief that the board serves as an aid to contacting the spiritual realm. The other is the belief that it is a way to get in touch with one's own subconscious.  Although commercially introduced as a harmless parlour game, a Ouija board in any shape or form is a source of criticism and controversy.  Fundamental Christians say that the board is a portal to the devil.  Harry Houdini himself wrote in 1924 that he knew of five people in California who were driven clinically insane by using the Ouija board.  One would wonder of their mental state and level of perception before playing’ with the Ouija board.


English physician William Benjamin Carpenter coined the term‘Ideomotor Effect’ which refers to the influence of suggestion or expectation on involuntary and unconscious motor behaviour.  Ideomotor Effect has been around for over 150 years but is not a commonly known theory.  It can be used to explain the physiology and psychology to make divination a delusional concept.  It is a classic example of how we can be misled by our senses to trust in an apparent reality.  When one has a personal experience it is more real to them than any other as they trust in the perceived infallibility of their own senses.  In any event the Ideomotor Effect is a good example of why, when investigating and using equipment we should use objective, scientific testing rather than rely on subjective, personal experience to work out what is real and what is not.


The intrigue and mystery of the Ouija draws many into its realm.  Whether you sit right or left wing in belief, feel it’s a portal for the devil, use it for divination or investigating the paranormal…bear in mind the Parker Brothers slogan: "It's only a game—isn't it?".