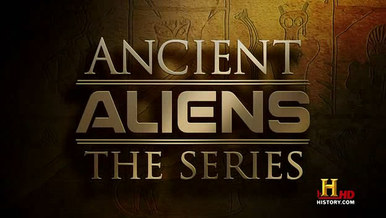 The History Channel adds a nice mix of reality TV and history in their show Ancient Aliens.  The basic premise of the show is on the speculation that if extra-terrestrials visited us centuries ago, many of the ancient wonders of the world are actually their creation.  It is surmised that their superior knowledge of science and engineering enabled them to share their talents with early man.

I quite enjoyed the show, and as fanciful as it seems, their theories also make it seem believable.  From an episode which explores the possibilities that ancient aliens are responsible for a variety of cults which have existed around the world, and which have committed some atrocious acts, to talk of ancient structures being the work of ‘other worldly’ beings, this show sucks you in.

Official blurb:
ANCIENT ALIENS: SEASON TWO
ANCIENT ALIENS returns in SEASON TWO to explore the controversial theory that extra-terrestrials have visited Earth for millions of years. From the age of dinosaurs to ancient Egypt, from early cave drawings to continued mass sightings in the United States, each episode in this new series gives historic depth to the questions, speculations, provocative controversies, firsthand accounts and grounded theories surrounding an age-old debate: Did intelligent life forms from outer space visit Earth thousands of years ago? Do they visit us now? HISTORY™ ignites this inquiry.